My name is Alibay Mammadov. But in Japan, everyone calls me “Aribei” (the Japanese pronunciation).

I am currently in the first year of my master’s at the Graduate School of Letters.

My homeland is The Republic of Azerbaijan but I was born in Moscow as my parents – both Azerbaijanis were studying in Moscow State University at that time. They are historians. After the collapse of the Soviet Union my parents took me there and I grew up in Baku, the capital and largest city in the country. The meaning of Baku is “Wind-pounded city”. Let me share a little information about my country. Azerbaijan is the largest country in the Caucasus region located at the crossroads of Western Asia and Eastern Europe. Azerbaijan has an ancient and historic cultural heritage, including the distinction of being the first Muslim-majority country to have operas, theater and plays. It is also a very fortunate country with its large stocks of natural resources – especially oil and natural gas, centuries-old culture, history and ancient people, whose lifestyle presents a unique and harmonious combination of the traditions and ceremonies of different cultures and civilizations. Azerbaijan is also known as The Land of Fire. 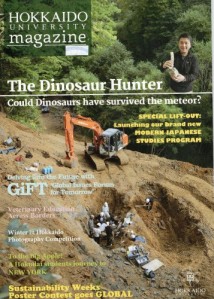 As a child my mother gave me a lot of information about Japan, Japanese history, the beauty of Japanese culture, Japanese people and from an early age, I grew to love and respect Japan.

I also read a lot of books, articles and magazines and began to discover the territorial issues that Japan faces with her neighboring countries. These issues fascinated me partly because Azerbaijan also is dealing with the same kind of issues.

In order to learn more about territorial disputes from the Japanese perspective, I decided to come to Japan to study the issue first-hand. As luck had it, I had one particular Japanese friend in Azerbaijan who recommended Hokkaido University as a great place to research territorial issues facing Japan. In order to enter, I had to pass an exam at the Embassy of Japan in Baku. I was so relieved when I found out I had passed – it also made my family so happy knowing the opportunity had opened up so many doors for me and my future. 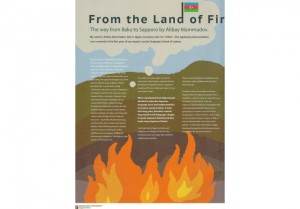 After coming to Japan, I made a lot of friends from different countries in Sapporo. We often meet and talk about what is going well and not so well in our lives studying abroad. Thanks to this discussion, I really feel we are becoming stronger as people as well. I personally love living in Sapporo.

It’s beautiful all four seasons of the year. Back in Baku, the climate is similar to that of

Tokyo and it snows just once or twice over winter. I think that winter without snow is not a real winter and Sapporo is the land of snow. During my first winter spent in Sapporo, I was shocked at the amount of snow that falls!

When I have free time I love to play futsal with my friends. I have a strong passion for futsal. Futsal is not a just game for me, it’s a way to unwind after study and reenergize for new challenges that I may face in my daily life in Hokkaido.So far, my life in Sapporo has been fantastic. 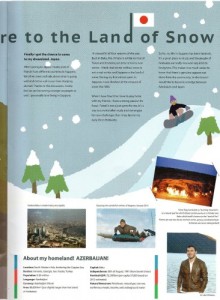 From The Land of Fire to Land of Snow

The way from Baku to Sapporo by Alibay Mammadov.

It’s a great place to study and the people of Hokkaido are really nice and very kind to foreigners. This makes it so much easier to know that there is genuine support out there from the community. In the future I would like to become a bridge between Azerbaijan and Japan.

About my homeland! AZERBAIJAN：